Chanukkah’s Festival of Lights gives us all reasons to shine – and a special responsibility to shine in a way that builds resilience in ourselves, each other and our community. 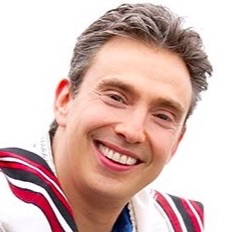 Happy December and early Chanukkah blessings for a Hag Urim Sameah – a happy festival of lights!

Amidst viruses and vitriol, and City Island’s recent waves of hate – it seems fitting that Chanukkah’s light comes now.

In mystical circles, this Jewish month of Kislev is called a miracle month – for Chanukkah’s miracles of triumph over antisemitic subjugation and remnant oil that shouldn’t have been enough to illuminate the Temple but somehow was.

Thousands of years later, Chanukkah is Judaism’s #1 most popular holiday according to researchers. It’s fun. It’s warm. It’s cozy. It’s something we can do wherever we are. It’s musical. It’s defiant. It’s hopeful. It’s yummy (cue the latkes!).

Chanukkah is all of that – so you won’t want to miss TBE’s special Chanukkah line-up. And, Chanukkah is much more – especially this year.

If we learned Judaism as children, odds are good that the Judaism we learned was one  of resistance. We’ve all heard it in one or another form: Don’t give Hitler a posthumous victory. Double down on Judaism’s light to keep it alive in that flame. Resist the season’s material excesses. 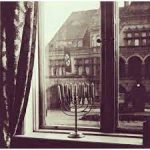 Sure. Every year at this time, social media reposts a poignant picture of a chanukkiyah adorning a window in Nazi Germany. Every year, we read with it the tagline, “Our candles will out-live your flag.” The photo and tagline capture this impulse to frame Judaism and spirituality as resistance to hate.

Especially now, amidst the latest waves of racial and antisemitic hatred, a Chanukkah of resistance makes intuitive sense.

Yet some miracles happen only in the dark. 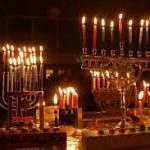 Chanukkah’s miracles weren’t about resilience: they were about resilience. The story we re-tell is about Maccabee defenders whose resilience helped them eject antisemitic occupiers. The Temple’s lamplight oil didn’t resist: it lasted – and it shined.

Reframing Chanukkah from resistance to resilience has my focus this year. After battening down the hatches against viruses and vitriol, political and economic spasms occupying our mental and emotional real estate, there’s a lot of tired. Some folks long to shine but forgot how. Some folks are so accustomed to resisting – or just tuned out in self-defense or self-preservation – that perhaps parts of us feel shut down. When waves of hate lapped against our own community, some folks felt it really, really deeply.

Yet some miracles happen only in the dark.

In the wake of City Island’s turn in the spotlight of hate, we had a record turnout for City Island’s multi-faith Thanksgiving service at Grace Episcopal to support the Trinity food pantry.

Days later, over a dozen TBE folks turned out to serve lunch on Thanksgiving.

We met with City Island business owners targeted for hate and made new friends we never might have known. Their resilience was inspiring.

I joined a 125-clergy coalition with NYC Mayor Eric Adams in a multifaith unity gathering – not just against hate but also for the love, care and practical supports all peoples need to flourish. The gathering was beautiful – every color, every creed – all of us together to draw nourishment for our collective resilience.

The New York Police Department – New York’s finest – have been great in supporting TBE and other shuls at this time.

TBE won its first grant to bring our uniquely joyful Judaism to the broader community. Thanks to UJA, this year’s First Light on December 18 will be an all-area Chanukkah event with caroling and music like City Island has never seen.

Yes, there’s darkness in the world; antisemitism rears its head yet again. And, yet again we’re learning that our most powerful tool isn’t resistance but resilience – a Judaism that shines brighter when the world gets dark. It’s a Judaism that shines with spiritual wisdom, volunteerism, generosity and unity. It shows up. It reaches out. It inspires pride in who we are and yet can be.

In short, our best antidote to anti-semitism is pro-semitism, a positive Judaism shining proudly and publicly. After all, it’s not only the candles that light the darkness: we do, too. “God’s lamplight is the human soul” (Prov. 20:27).