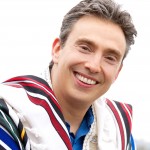 Gut yontif on this Yom Kippur day of transformation.  This year’s High Holy Day themes of strength, resilience, courage and daring all flow into today, when we can lift our lives – perhaps in just an instant – if only we’ll take the leap.

Last Yom Kippur, I quoted mysticism scholar Gershom Scholem, who called days like today “plastic” times – “crucial [moments] when it’s possible to act” with greatest effect because circumstances or times are favorable.  A window of opportunity opens: things long “stuck” can get “unstuck.”  Yom Kippur is that kind of moment in Jewish spiritual time, much as this era is in nation and planetary time.

One year later, we’ve been through a lot.  Many died.  Many alive have felt optimism and strength falter.  After all that’s happened, the very idea of a plastic time, much less the strength to seize it, can feel hollow.

So, how can we do it?  How can we really cultivate strength to better our lives, to make the most of these plastic hours?

Judaism’s plastic times aren’t just opportunities: they’re strength generators.  One of them is Shabbat, strength generated by refocus and rest – for us, and also for the land.  Every seventh year in Jewish history was a Shmittah year for the land lay fallow, to glean what grew naturally, to let the land and the people recover their strength for the years ahead.

Now that most of us don’t live on farms, the Shmittah year is for two things: to renew our ecological commitments to help the Earth renew her strength; and to take stock – to look back on the last seven years and ahead to the next seven.  In modern jargon, Shmittah is for strategic planning, and this year is a Shmittah year.  So this year, together we’ll double down on our ecological commitments as a Jewish practice.  We’ll dream into what our community’s best future can be in a fast-changing world.  And we’ll cultivate the strength, resources and structures to help bring those dreams to life.  I hope you’re excited: I am!  Stay tuned….

Another of our plastic times is this season, and especially this Yom Kippur day.

My friend Jack Moline is executive director of the Interfaith Alliance and previously was a pulpit rabbi in political circles.  Jack helped write President Clinton’s “shalom, chaver” (goodbye, friend) eulogy for Israeli Prime Minister Yitzchak Rabin, assassinated at a Tel Aviv peace rally.  After Jack mailed a recent fundraising appeal, an oddly large volume of letters came back as undeliverable.  The recipients had died, many from covid.  Most of the letters bore Postal Service imprints to that effect, but one had a handwritten message, and Jack posted its photo to Facebook: 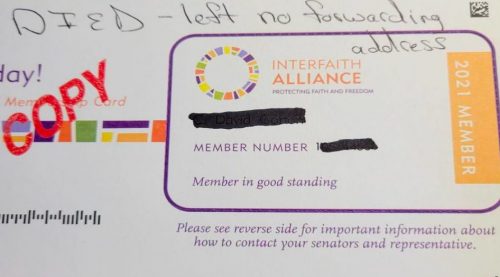 What a poignant question: After we die, where do we go?  What’s our forwarding address?  And looking at the redacted part, I could see that the intended recipient’s name was “David.”  It might have been me.

It might have been any of the over 654,000 dead from covid-19 in the U.S. alone.  To honor each for just one minute, we’d need over 15 months.  Or it might have been victims of Miami’s Champlain Tower collapse.  Or  Hurricane Ida’s freak floods last month.  Or Mexico’s earthquake last week.  Or the hit-and-run driver who instantly killed the father of my friend R. Shoshana Leis last weekend, on Shabbat Shuvah, the 20th anniversary of 9/11.

So unpredictable – no more tomorrows, no more plastic times.  That’s why Talmud (Shabbat 153a) urges, “Do teshuvah one day before your death” – which means today, because we never really know. 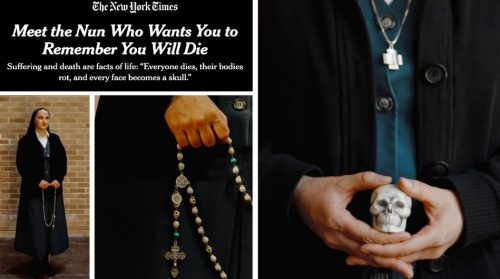 The equivalent idea in Catholicism is memento mori, Latin for “remember your death.”  As the New York Times reported during the pandemic’s second wave, the practice is to “think about your own death every day, as a means of appreciating the present and focusing on the future,” to build strength for living ethically and well.

This practice hails from Benedict, the Catholic visionary of the sixth century; and before him Socrates as documented by Plato; and before them the Jewish Book of Psalms. 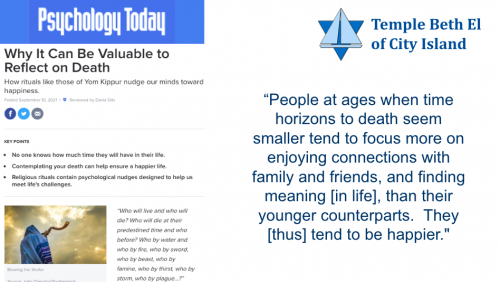 If we’re skeptical, consider that it’s also good science.  Last week’s Psychology Today reported a study finding that contemplation of our own mortality can actually make us happier, especially for elders.  More than most younger people, “people at ages when time horizons to death seem smaller tend to focus more on enjoying connections with family and friends, and finding meaning.”  By prioritizing what’s most important, elders tend to be happier.

But, the study cautioned, “The difference isn’t really a function of age.  The move toward or away from deeper connection and wellbeing can happen at any age if the time horizons suddenly shift.”  Think about kids with acute leukemia who become founts of inspiring wisdom and love beyond their years.  It’s less about age than awareness – that our “someday” can come sooner, or soon, or even tomorrow.

Yom Kippur, its liturgy, white garments as angels or burial shrouds, facing our mortality – it all comes to prod us to soften inhibitions, to do teshuvah, to return to what’s most important, to seize our plastic hours while we can.  The unpredictability of our own mortality, which we so often try to pretend away, turns out to be a potent path of wise living. 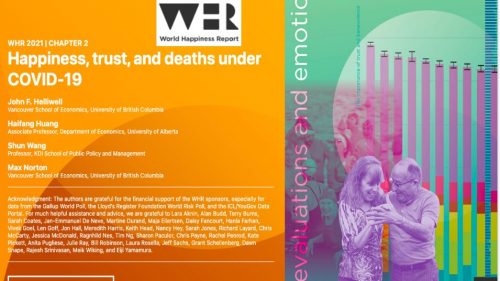 It’s such a powerful idea that a whole country adopted it as official government policy.  The Himalayan nation of Bhutan practices a form of Buddhism that routinely focuses on mortality.  For this reason, Bhutan became the first nation to base policy decisions not on economic Gross Domestic Product (GDP) but rather Gross Domestic Happiness, which charts common causes of happiness: love, community, purpose, health, nature, culture, freedom and comfort.  By basing policy on happiness, Bhutan created more parks than anywhere in Asia.  And this month’s World Happiness Report found that Bhutan was the only Asian nation with zero covid-19 deaths last year, despite prolific air travel in and out, because Bhutan’s happiness policy prioritized public health.

But can it help us live better lives here?  Can we really realign our lives toward genuine soul joy by focusing on the fragility of our lives?

Three groups close to heart show us that, spiritually speaking, the answer absolutely can be yes – though it’s not automatic.  And all three groups, like that Psychology Today study, are counter-intuitive.

The first group is Holocaust survivors.  Many survivors carried tortured memory of what they endured.  And many also shined with a life-seeking spirit, aspiring to live well for what’s most important.  Many became spiritual.  They express gratitude for blessings however small.  Some even became known for humor.  If you haven’t watched the PBS documentary “The Last Laugh,” about Holocaust survivor humor – even in the camps – it’s inspiring.  After suffering hell on Earth, their strength came by facing their own mortality.

The second group is Israeli society.  After decades of danger ingrained in daily life – most every adult a soldier, most every family facing casualties – Israel became famous for a life-affirming chutzpah able to work miracles.  Stereotypical Israeli authenticity and candor helped lift Israel high on the World Happiness Index.  But researchers found that recent policies protecting most Israelis from daily danger, and moral conflict about the Mideast situation, reduced national happiness. 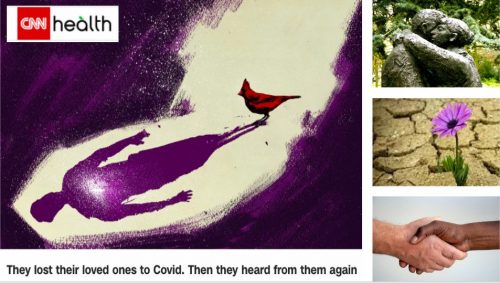 The third group might be the most surprising of all – the loved ones of over 654,000 Americans who died from covid-19.  How can pandemic mortality ever promote happiness?  CNN reported this June on a sharp rise in reported “After Death Communications” (ADCs) – experiences of visits from beloveds who had died from covid:

“These experiences can be subtle: relatives appearing in hyper-real dreams, a sudden whiff of fragrance worn by a departed loved one, or unusual behavior by animals.  Other encounters are more dramatic: feeling a touch on your shoulder at night, hearing a sudden warning from a loved one, or seeing the full-bodied form of a recently departed relative appear at the foot of your bed.”

Some of us know these kinds of experiences.  They extend across all societies, all religions and every era in history.  But history shows that some eras have more ADCs than others.  The 1918 influenza epidemic, the 9/11 attacks, the 2011 tsunami that killed 20,000 in Japan, and now the covid-19 pandemic, all coincided with huge spikes in reported ADCs.

If ADCs can happen anytime, why were reported ADCs much more prevalent after these deaths?  What makes these deaths different?  Researchers coalesced around one idea: there was no time or way to say goodbye.  Something about the lack of closure, the suddenness, or both, made ADC reports far more likely.

Many believing that the soul transcends this life also believe that deceased loved ones can reach out.  Maybe souls reach out differently after a sudden death.  Maybe the sudden intrusion of life’s inherent fragility opens us more fully to a consciousness always around us.

Maybe.  We don’t know for sure.  Scientists mapping the mind and the DNA genome still can’t even say what consciousness is.  As New York Times columnist Frank Bruni wrote recently, scientific advances “only sharpened the ‘hard problem’ of … how physical processes alone could create the lived reality of conscious life.”  For loved ones reporting ADCs after covid-19 deaths, maybe that’s the point: they experienced a larger reality that – even amidst grief – has reshaped their lives with a deeper sense of meaning, purpose, love and, yes, genuine happiness.

Those of us who’ve lost loved ones would trade an infinite number of after-death visits to get our loved ones back, healthy and safe and here holding our hands.  It’s our human condition: Holocaust survivors, Israel’s pioneers, and every generation who lived and suffered before us all surely felt similarly.  And still all of them also are our teachers, along with the government of Bhutan, and the Catholics of memento mori, and this Yom Kippur day.  They all teach the great spiritual potency of mortality, especially our own – which is everyone’s true “forwarding address” – and its power to inspire us into living in the very best ways we can.

In a moment, we’ll stand together for Yizkor – in the flow of ancestral memory, facing spiritual eternity.  We’ll stand as living conduits between our loved ones and their “forwarding address,” and our “forwarding address,” forward and back through ancestral time.  We’ll do it for them, and for ourselves, to rouse courage and daring to act – while we can, and in every way we know deep inside that we must.  We’ll do it for our souls, each other, our community, our nation, and our ailing planet.

So with timeless legacy flowing in our veins, it’s time to harness the power of life’s fragility for meaning and joy of heart, for all that is most important in life.  It’s time to seize this plastic hour and rise above whatever inner barriers may inhibit us.  Especially at this start of our Shmittah year, may our descent into this valley of the shadow of death rouse us to rise up with new strength for this precious turn of our journey of soul.

Or as Leonard Cohen so poignantly put it – sing it aloud with me if you know it:

If It Be Your Will
(Leonard Cohen)

From this broken hill all your praises they shall ring
If it be your will, to let me sing

And draw us near and bind us tight
All your children here, in their rags of light
In our rags of light, all dressed to kill
And end this night, if it be your will

If it be your will